Extended Memory –> Specifies how much of the SAP extended memory was requested by this user.

Swap Memory –> SAP swap area is only used for a limited number of ABAP commands.

The roll area is a memory area with a set (configurable) size that belongs to a work process. It is located in the heap of the virtual address space of the work process.

When the context of a work process changes, the data is copied from the roll area to a common resource called the roll file. To prevent repeated copying, another roll buffer is located in between that is part of the shared memory.

SAP extended memory is the core of the SAP memory management system. Each SAP work process has a part reserved in its virtual address space for extended memory. You can set the size of extended memory using the profile parameter em/initial_size_MB: Extended Memory Pool Size.

You can map the extended memory from the common resource onto any work process, and after onto another process on the same address in the virtual address space. This is important if you work with pointers in the ABAP program.

Other processes cannot use private (heap) memory. After releasing the assigned memory, the operating system still considers the (virtual) memory as being occupied by the allocating process. These characteristics of heap memory require that:

In the parameter settings, ensure that not too many dialog work processes are simultaneously in the PRIV mode, since this lowers system performance.

The other Work Process types (background, update, enqueue and spool work processes) are assigned heap memory after the roll area is used up. Allocating Extended Memory is not useful since no context change occurs for these processes.

Allocation of memory for the current internal session by transferring pages out of memory, similarly to operating system paging.

SAP Paging enables the roll area to be extended at ABAP runtime when a large dataset, internal tables, for example, is handled. 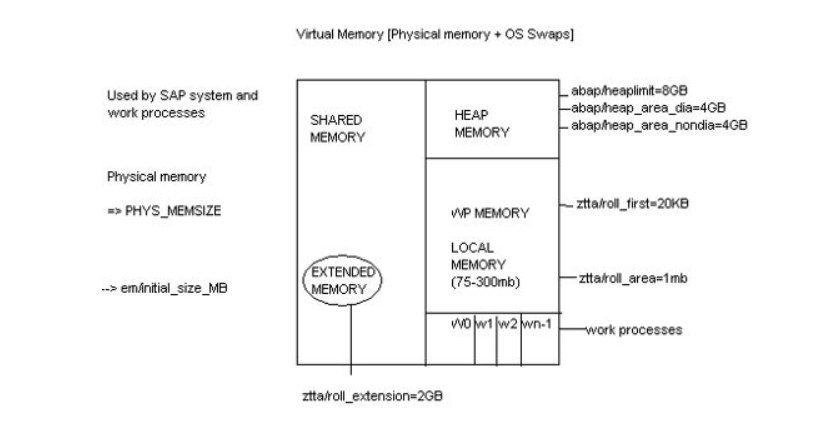 Based on above diagram will explain how the sequencing works

6.Operating system limit of allocation of memory.
7.The swap space in the host system is used up or the upper limit of the OS address space is reached.

Once work process comes in PRIV mode it  cannot be terminated by the parameter “rdisp/max_wprun_time”, it remains connected to the user until the user ends the transactions or it is timed out by the system due to the memory or explicitly logged out using SM04/DPMON.

1) At first Roll Area is used and its value is based on SAP parameter “ztta/roll_area”,

If roll area is full then.

2) Heap area is used and it will be available until following occurs.

c) The swap space in the host system is completely used up. However, this situation should not occur often which results in severe performance issues. Please check swap space requirements for various platforms and define swap space optimally to avoid this issue

3) If the heap memory is full then it uses extended memory and its value based on SAP parameter “em/initial_size_MB”.